In the UK, calcium carbonate geology is based on three principal resources: 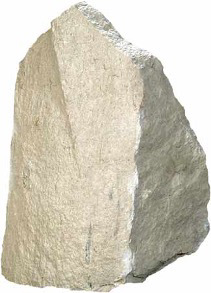 Sedimentation is the rock forming process from which all limestones, including chalk and, ultimately, marble originate.

Sedimentary rocks generally form in two stages: initially loose materials are deposited in layers, and then they are consolidated to rock by pressure or cementation. The physical, chemical or biological alteration of sediments into sedimentary rock is called diagenesis.

Most significant limestone deposits are derived from organogenic sedimentation meaning the original material forming the basis of the rocks is of biological origin. This mainly concerns the inorganic remains of invertebrates which deposit on the seabed and become consolidated in the course of time. The size of the component elements ranges from whole and broken shells of molluscs to coccoliths (single-called marine algae) measuring a few thousandths of millimetre.

Chalk is a poorly compacted sedimentary rock, whose diagenesis is incomplete. The sediments from which chalk originates are predominately composed of compacted coccoliths (a lime-secreting algae).

Chalk is a soft, white, porous form of limestone composed of the mineral calcite and maybe yellowish, grey or white in colour. Chalk is obtained from numerous sites along the European chalk belt - from the UK through France all the way to the island of Rügen in north Germany.

The major chalk producing regions in the UK are centred on the high-quality chalk deposits found in Humberside, Cambridgeshire/Suffolk and Wiltshire. These deposits were laid down during the Cretaceous period between 70 and 120 million years ago.

Limestone is a biogenic rock, but it is more compacted than chalk. It is a sedimentary rock formed from the remains of remains of billions of tiny shells and skeletons of microscopic animals or foraminifera.

Pure limestone is white or almost white. Because of impurities, such as clay, sand, organic remains, iron oxide and other materials, many limestones exhibit different colours, especially on weathered surfaces.

The Peak District, Derbyshire a major source of high-quality limestone was formed during the Carboniferous geological period, some 340 million years ago. The Peak District limestone formed over a period of 50 million years and changes in conditions on the sea floor over that time are reflected today in variation in rock colour, strength and fossils. Other limestone producing regions in the UK include Northern Ireland and Cumbria.

Dolomite is formed similarly to limestone except that the sedimentation process occurs in the presence of magnesium. Dolomitisation results in some of the calcium ions in the crystal lattice being replaced by magnesium ions and leads to the formation of dolomite CaMg (CO3)2 – calcium magnesium carbonate.

Limestone that is partially replaced by dolomite is referred to as dolomitic limestone or magnesian limestone.

Permian dolomites are the main source of dolomite in the UK. Most significant deposits are found in a belt running north-south for some 230 km from Newcastle to Nottingham.

Marble is a coarse-crystalline, metamorphic rock, which is formed when chalk or limestone are recrystallised under conditions of high temperature and pressure, often a result of regional metamorphism – movement of the earth's crust.

The temperatures and pressures necessary to form marble usually destroy any fossils and sedimentary textures present in the original rock. In some cases, this process has produced white marbles of exceptional brightness such as the famous deposits in Carrara in Italy.

True marble has a low porosity and may contain calcite crystals up to several centimetres in length. Large deposits of marble are to be found in North America and in Europe in Austria, Scandinavia and Italy. However, the UK has no white or other marble deposits of significance though stone is imported and processed in the UK to produce high whiteness fillers and pigments.